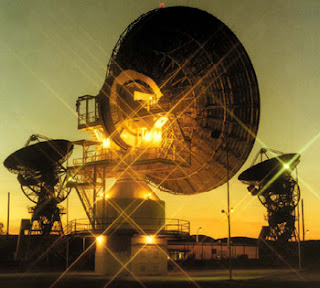 
"Trillions of bytes of textual archive and thousands of online users, or gigabytes of live data stream per day that are filtered against tens of thousands of complex interest profiles"

Designed and coordinated by NSA, the ECHELON system is used to intercept ordinary e-mail, fax, telex, and telephone communications carried over the world’s telecommunications networks. Unlike many of the electronic spy systems developed during the Cold War, ECHELON is designed primarily for non-military targets: governments, organizations, businesses, and individuals in virtually every country. It potentially affects every person communicating between (and sometimes within) countries anywhere in the world. The United States National Security Agency (NSA) uses Echelon to intercept and process international communications passing via communications satellites also. It is one part of a global surveillance systems that intercept messages from the Internet, from undersea cables, from radio transmissions, from secret equipment installed inside embassies, or use orbiting satellites to monitor signals anywhere on the earth's surface. The system includes stations run by Britain, Canada, Australia and New Zealand, in addition to those operated by the United States. They all form part of the same integrated global network using the same equipment and methods to extract information and intelligence illicitly from millions of messages every day, all over the world. The system works by indiscriminately intercepting very large quantities of communications and using computers to identify and extract messages of interest from the mass of unwanted ones. A chain of secret interception facilities has been established around the world to tap into all the major components of the international telecommunications networks. Some monitor communications satellites, others land-based communications networks, and others radio communications. ECHELON links together all these facilities, providing the US and its allies with the ability to intercept a large proportion of the communications on the planet. The computers at each station in the ECHELON network automatically search through the millions of messages intercepted for ones containing pre-programmed keywords. The thousands of simultaneous messages are read in "real time" as they pour into the station, hour after hour, day after day, as the computer finds intelligence needles in telecommunications haystacks. According to its website, the USA's National Security Agency is "a high technology organization... on the frontiers of communications and data processing". Russia, China, France and other nations also operate worldwide networks.